“There is an obvious gap in the creation account, which is located between Genesis chapter one: verse one and verse two. This Gap period was probably billions of years. This GAP is from the downfall of Lucifer and one-third of the Angels who dwelled on the Earth. In Revelation 12:7-9 reveals that Lucifer and his followers made war against Almighty God and the Holy Angels. The accounts in Genesis shows there was a re-creation of the Earth and our solar system…”

In Colossians 1:16 read “For by him (JESUS) were all things created, that are in heaven, and that are in earth, visible and invisible, whether they be thrones, or dominions, or principalities, or powers: all things were created by him (JESUS), and for him:” This most definitely includes all the Angels. The Angels were the first of God’s creation. All of the Angels watched in awe the creation of the Universe…” 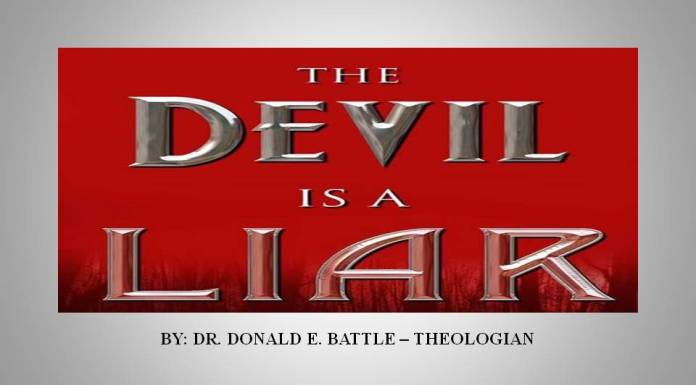 THE DEVIL IS A LIAR… BY: DR. DONALD E. BATTLE ~ THEOLOGIAN. (Excerpts from Dr. Battle’s Theology Books) The DEVIL / Satan is a LIAR and so are his followers. The Devil is the FATHER OF LIES: This is found in the Bible, in John 8:44 that read: “(JESUS SAID) Ye are of your FATHER THE DEVIL, and the lusts of your Father ye will do. He was a murderer from the beginning, and abode not in the truth, because there is NO TRUTH IN HIM. When he speaketh a LIE, he speaketh of his own: for he is a LIAR, and the FATHER of it.” The Devil is also the following: Con artist, Master of Deception, Author of Sin, and Evil Genius. Satan’s former name was Lucifer before his downfall. Lucifer was the high ranking Chief Cherub Angel and Worship Leader. Lucifer persuaded one third of the Angels to follow him in rebellion against Almighty God. They were all defeated and were cursed and reduced to evil spirits (Devil and Demons) who were cast down to dwell on the earth. This was in the period of the Creation Gap in Genesis chapter 1:1-2. Their numbers may be in the billions. Satan has deceived so many people into believing that he and his demons do not exist.